I returned yesterday from two exciting days at the 2009 edition of the FUZZ Guitar Show in Gothenburg. Last time I attended a music related trade show was roughly 20 years ago. At the time, I exhibited my guitars in the booth of Uppsala Musikverkstad (which is now 4Sound Uppsala), and the show was also set in Gothenburg. Imagine my surprise when I realized how little had transpired in 20 years. Sure, I don’t have things like the width of Floyd-Rose locking nuts for different brands of necks and things like that committed to memory any more, but I don’t feel at all like I have missed anything during this time (unless something has happened and disappeared again).

I have to give credit to the organizers for putting up a well organized show. I didn’t exhibit, so I don’t know how well the logistics worked, but as a delegate I had a pleasant experience. The café on the exhibition floor served high quality food at very reasonable prices and had a packed schedule of performances by a great range of string-related performers. The few points of criticism would be: cash-only entrance, poorly signed up-stairs exhibits and the fact that some exhibitors were allowed to be very loud at the expense of conversations in the vicinity. I haven’t heard how many visitors attended, but the target was for 3-4000 visitors, and I wouldn’t be surprised if that target was surpassed. The lines were quite long outside the entrance for a lot of the time during the two days.

This show is purely about guitars. Interestingly enough, I was most impressed by a german kit of drums… The Klang Initiative percussion blew me away. 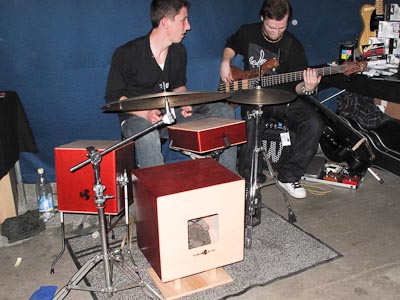 The effect and sound of these wooden square boxes is amazing. I had a similar experience many years ago when I heard a Xaphoon, which sounds ridiculously close to a saxophone while looking like something else completely. The guys in the picture above did a good job of demoing it as well.

A huge portion of the show was occupied by vintage guitars. Not being a vintage afficionado myself, I don’t quite see the point, but I have no objections. It seems that a lot of visitors came only to look at these old gems. Something else that I am not, is strongly opinionated. I rarely try to enforce my opinion on others, although I do often have views and very concrete goals and targets set for myself. I will say though that I am very saddened by the utterly pointless trend of “pre-worn” fake vintage instruments. To those who succumb to it I can only offer my condolences.

I don’t really mind absence of innovation. There is no point in innovating for the sake of it. If there is a good design that works, leave it alone by all means. I don’t mind simplicity or a back-to-basics approach. Let me draw a parallel: I like cycling a lot. I ride my bicycle(s) both as a means of transportation and exercise. I have a utility bike that can load a lot of stuff on, with splash guards, 24 closely spaced but reasonably low gears, and pedals that work with both regular shoes and SPD clips. My second bike has narrow slicks, 18 closely spaced heavier gears and specialized pedals and no other features. Neither is innovative, but both serve their respective purposes. My current bike fetish (for more discussion on fetishes, see elutherie.org) is “fixies”, or fixed gear bikes. They have only one gear and the pedals turn as you roll, so there is no rest. The purists don’t even have brakes. Why? Back to basics. This is how the first 2-wheel bikes ever were made. They are almost unbreakable because there is a minimum of parts that can break. The trend is going back to those roots with leather saddles, antique geometries, etc. But would I want a replica of an 1800’s bike, sanded down to look old by some low-paid worker? No thanks. Enough said.

Some positives were meeting local (Scandinavian and European) luthiers and being impressed by the level of quality that is available. My guitar-related highlights were: 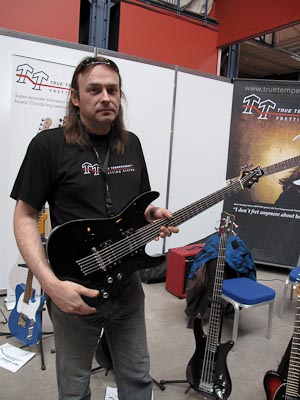 Anders Thidell, the inventor of the True Temperament Fretting System. Here is innovation at its best, and it’s Swedish. Anders also happens to be a very humble and nice guy who freely shares his innovation process. If you haven’t checked it out yet, do like Steve Vai, Claes Yngström, Steve Kaiser and many others and go “True”. 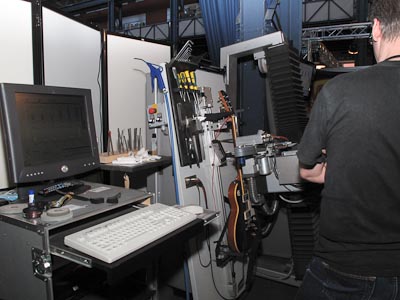 The automatic guitar tech, by Guitar Labs, was impressive. This type of thing happens to be my day-job, i.e. software controlled mechanical contraptions, so it appealed to me in more ways than one. 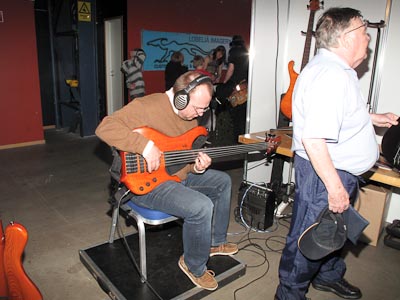 Le Fay make amazing bass guitars, including all hardware. In the picture, their metal fretboard “Remington Steele” can be seen. Reiner and Meik also happen to be two friendly and fun-loving guys. 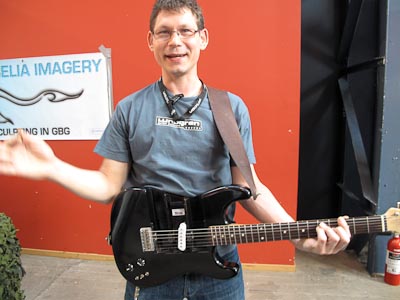 Johan Lundgren, of Lundgren Guitar Pickups, makes me proud to be Swedish. He started small but has grown to feature world artists on his roster. He has his complete range (which is huge) mounted on plug-in units that can slide in and out of his test setup (pictured) in seconds. Incidentally, Michele Benincasa, covered before uses Lundgren pickups on his Butterly build which is pictured below. 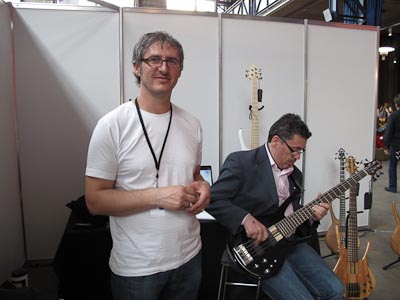 Edin Alidzanovic, of Edin Electric Bass Guitars, is faced with the challenge I had 16 years ago, with running both a family and a lutherie business, but is still going strong. 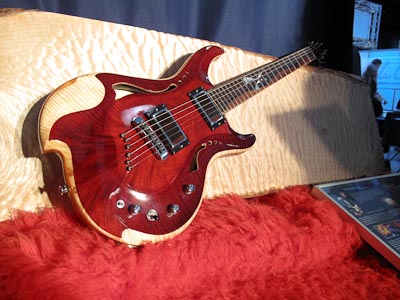 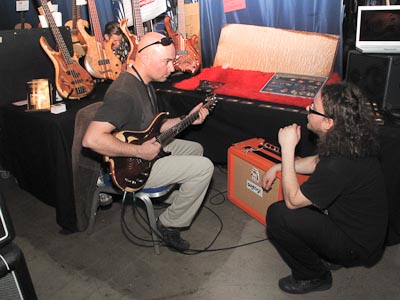 Another interesting acquaintance I made was Terje Dilkestad of bassplayersproshop.com. This is one more instance of building communities and making the global local, along the lines of elutherie.org.

So, thanks to everyone that gave me an interesting couple of days and see you next year!